Staying Safe When the Job Site Puts You on the Roadside 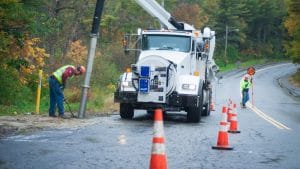 Vactor hydrovacs or combo sewer cleaners are inherently designed to prioritize operator safety on a job site. By having to complete work on the non-traffic side, a Vactor is designed to protect operators from on-coming traffic with the body of the truck and puts them out of harms way.

When working on a job site, safety of your crew and the public is paramount. The article below takes a look at the safety culture at Ulmer Construction. The owner Chuck Ulmer is a great example of someone who is putting safety first.

By Jessica Banner
Printed with Permission from Cleaner Magazine

The threat of injury is always present in a roadway work zone. As common as these sites are, providing the crew and passersby with a safe job site is not a simple task. Setting up orange cones, having someone direct traffic, and parking machinery as far off the roadway as possible are obvious steps that only scratch the surface when it comes to ensuring safety.

Chuck Ulmer, owner of Ulmer Construction of British Columbia, is passionate about keeping his crew and passersby safe when his company is completing a roadside job.

“The situation is constantly changing. I have to know who is around and adjust to what’s happening at any given moment,” he says.

Ulmer trains his crew members to keep their eyes open, and he gives them the necessary time it takes to get to know a job site before the actual work starts. He emphasizes that he can’t trust the public to pay attention to the changes a work zone has brought about, so he has to trust his crew to keep the public safe.

Roadside Safety Starts With a Plan

The layout of the construction zone is key. A good traffic-control supervisor should set up the work zone so that workers have the least possible exposure to injury. Every roadside zone is different, so there is no one-size-fits-all solution that can be applied.

Completely closing the road or rerouting traffic to the opposite side of the road is favorable. Unfortunately, these options aren’t always possible, and it’s necessary to use some sort of barrier to separate traffic from the work zone. In this case, the traffic-control supervisor should set up the zone so the traffic flow is as close to the original traffic pattern as possible.

In the work zone, the crew needs to be adept at recognizing blind areas, able to safely move machinery, and capable of working in a limited amount of space that can be incredibly loud due to passing traffic. When a worker is walking around equipment, making contact with the operator of the equipment is a must. Each crew member has to be aware of what’s going on at the site. To that end, one thing Ulmer insists upon for his job sites has to do with removing distractions.

“Phones are pretty much done away with on the job site. Guys have died,” he says.

Ulmer says he teaches his workers to constantly evaluate for new hazards and to keep their eyes and ears focused.

Keeping the public well-informed about the job is an important part of keeping the roadway safe. Many municipalities post signs and send letters directly to the public to inform them of the impact roadside work zones will have on traffic changes or closures.

Ulmer says he understands that keeping the lines of communication open within his crew is vital to safety as well. He has a Monday morning meeting each week where he makes sure crew members know exactly what’s going on.

“They know what to expect and what tools to take to every job for the whole week,” Ulmer says.

Beyond the weekly meeting, Ulmer has individual job site meetings to identify specific roadside hazards. His workers walk the site, and they are trained to make necessary adjustments where they see fit throughout the duration of the job.

Dealing With the Public Can be One of the Biggest Challenges

If there is evidence of duress such as barricades being hit or skid marks on the road, the work zone should be modified immediately. However, a problem Ulmer notes is the public’s inability to recognize and adjust to changes in traffic patterns.

“They’ve been going this way for 20 years, and they literally don’t see what’s been changed,” he says.

Ulmer spends as much time preparing his crew to deal with the public as he does preparing them for each work zone.

“Consider every type of person in your thought process when you’re setting up a job,” Ulmer says. “You have to think outside of the box in order to keep your guys and the public safe.”

One of the most important things he trains his workers to do is to catch motorists’ eyes so they’re sure to be seen. Generally speaking, Ulmer stands by the principle that, “If you have the outside of the job site protected, you automatically protect the inside of the site.”