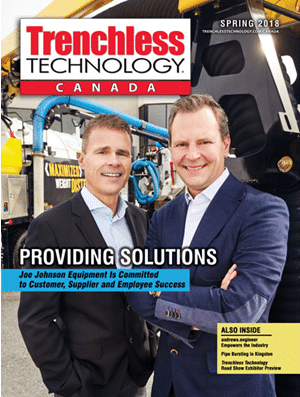 Municipalities and contractors across Canada recognize the Joe Johnson Equipment name and know that it is synonymous with industry-leading products and customer support, but that recognition did not happen overnight.

As a matter of fact, for a company that is so omnipresent across the country today, it worked for the first half of its life out of a single location in Barrie, Ontario. Expansion did not come until 2004.

Known widely today as JJE, Joe Johnson Equipment is a subsidiary of Federal Signal Corp. (since 2016) and has 11 locations in Canada and 13 locations in the United States affiliated with Federal Signal’s FS Solutions Centers. The company has approximately 300 employees and still calls Barrie its home base of operations.

The Seeds of a Business

Joe Johnson Sr. ran a public works equipment company for 29 years and Jeff cut his teeth in the industry working with his father during three of those years.

According to Jeff, vice president of sales, JJE came together as a challenge to his father. “I told him, ‘Hey we can do this together, and a lot better on our own while providing much better service to our customers’.”

When the business opened, the bulk of its customers were municipalities but, over the years, that has switched to a more even distribution between municipalities and contractors. That change also coincides with the company’s expansion out of Barrie.

“Joe Johnson Equipment started with municipal equipment and then added Vactor to the line up in 1997, covering the sewer cleaning and maintenance sector with its combination units,” says Joe Johnson Jr., JJE president. A young lawyer, he jumped into the business with both feet in 1998 at the request of his father who was diagnosed with, and later died from, cancer.

“Back then, 90 per cent of our sales were to municipalities and 10 per cent to contractors,” Joe says. “It was primarily because a lot of the municipalities were providing the sewer cleaning, road maintenance, snow and ice control or refuse collection services. It has since transitioned to the private sector providing those services.”

Along with that transition, the company has witnessed significant growth. In 1998, Joe’s first year with the company, JJE did $8 million in sales and this past year, the company closed at $165 million.

“We experienced growth both geographically and organically,” Joe says. “We’ve had a lot of success and received many awards. Even before the acquisition, we were supported by Federal Signal because of our level of execution when we receive a new [sales] territory.”

As the president and a person who was handed the keys to the family company he was involved with for its first decade of growth, Joe says he faced many challenges head-on to position the company for continued growth.

Click here to read the rest of the story at trenchlesstechnology.com.